On 9 May 1940 in Naples King Vittorio Emanuele III inaugurated the First Triannual Exhibition of Italian Overseas Territories: "... a global and summary review of achievements of value and of Italian work in Africa" that was to "document the whole of the political, social, economic, and cultural activities by means of which Fascist Italy is preparing to make our Overseas Territories into a luxuriant source of wellbeing and of power of the Homeland."

A complex propaganda operation that illustrated the policies implemented by the Regime in the territories of East Africa, Libya, Albania, and the Italian isles of the Aegean (today the Dodecanese), and which intended to present the colonies, not as territories of conquest, but as the natural continuation of its own territory beyond the sea, linked to the homeland by historical, social, and economic ties. 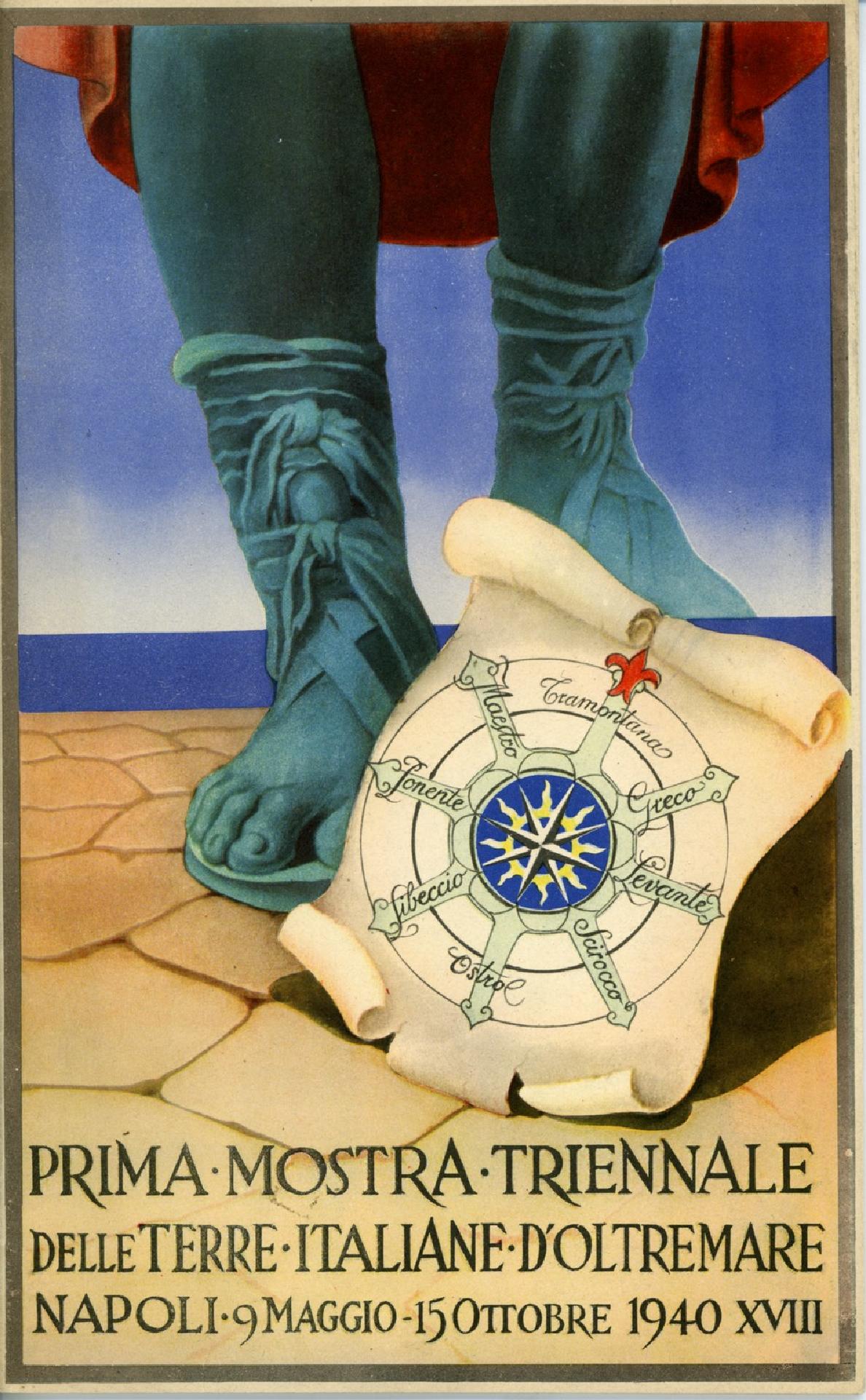 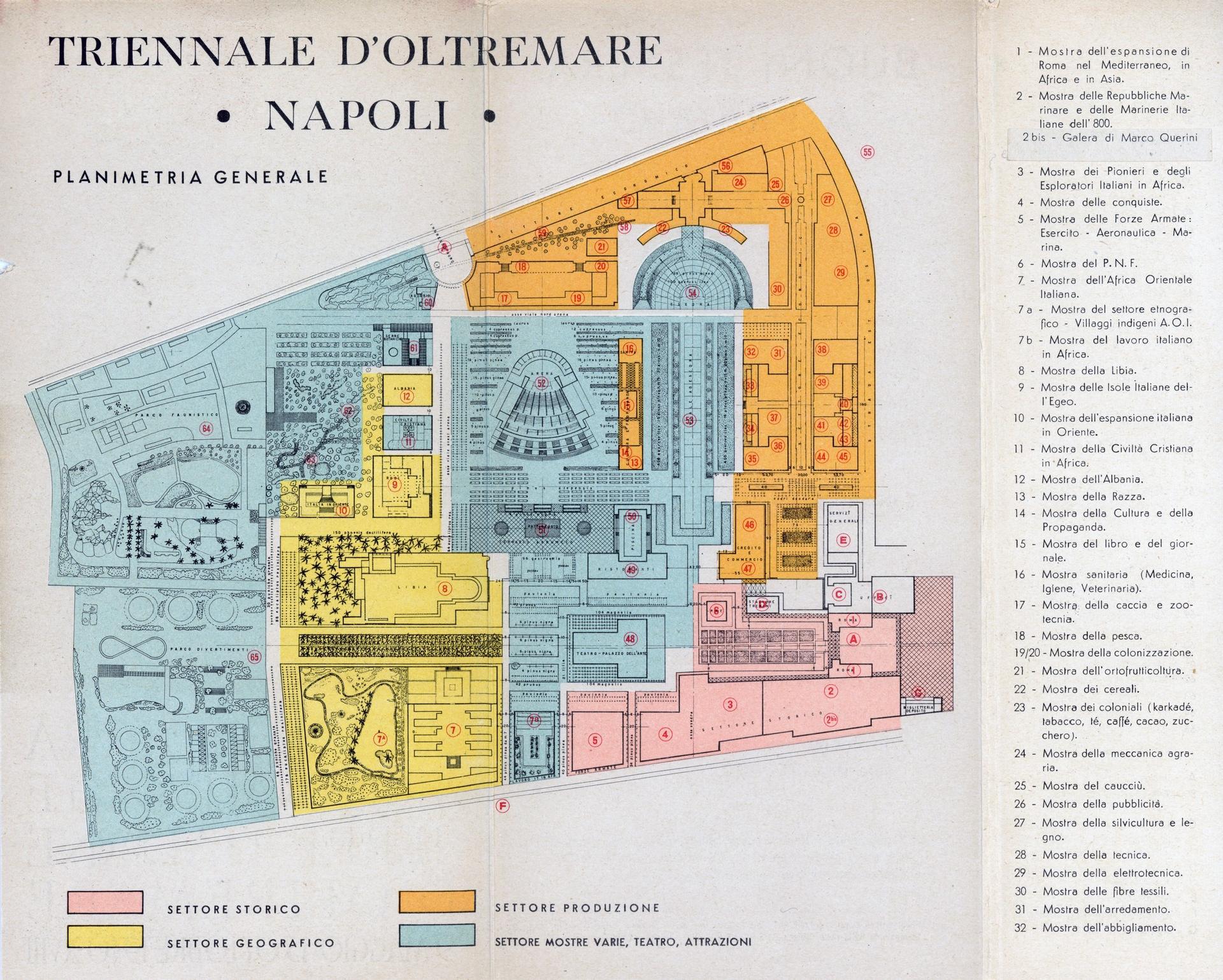 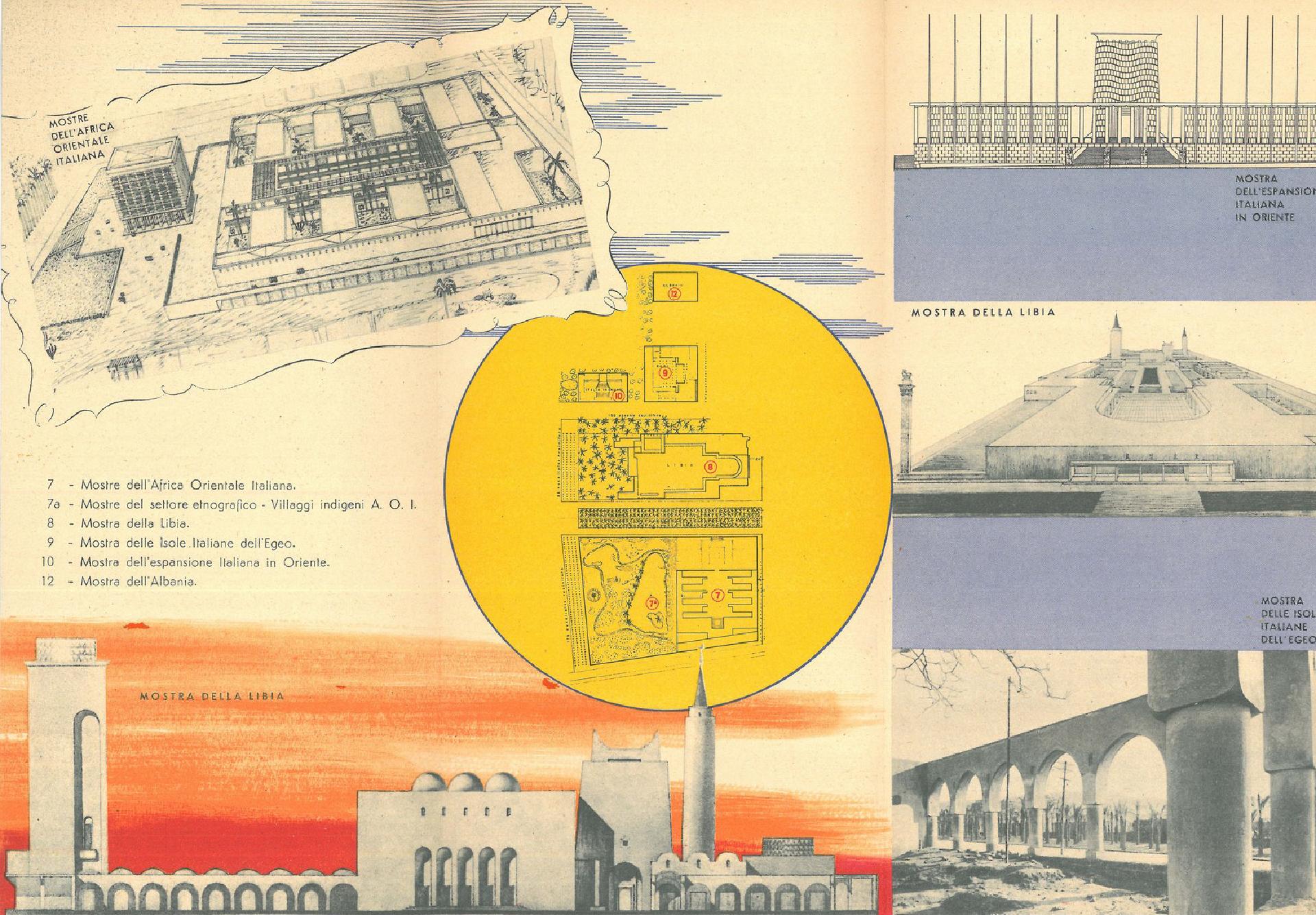 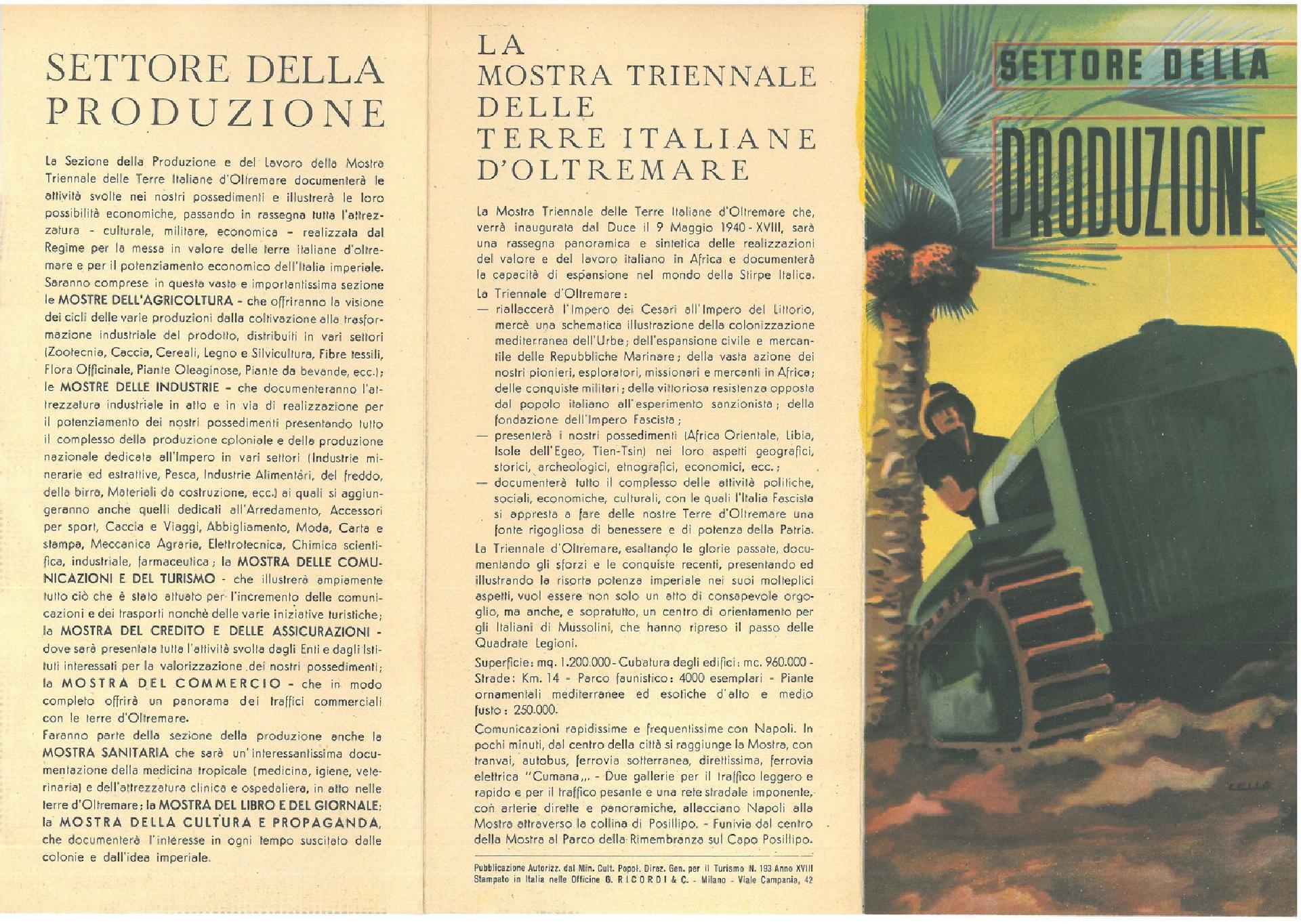 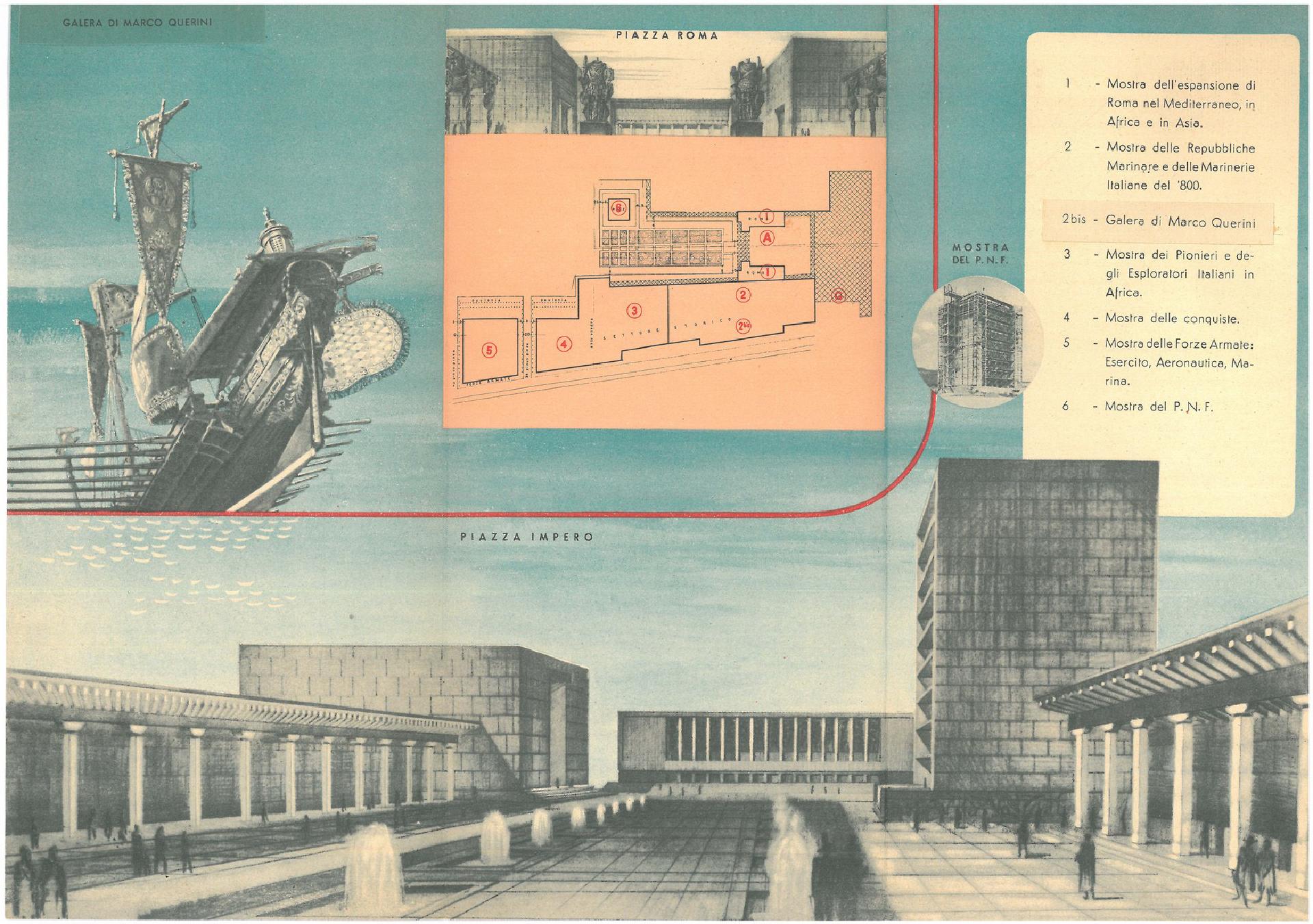 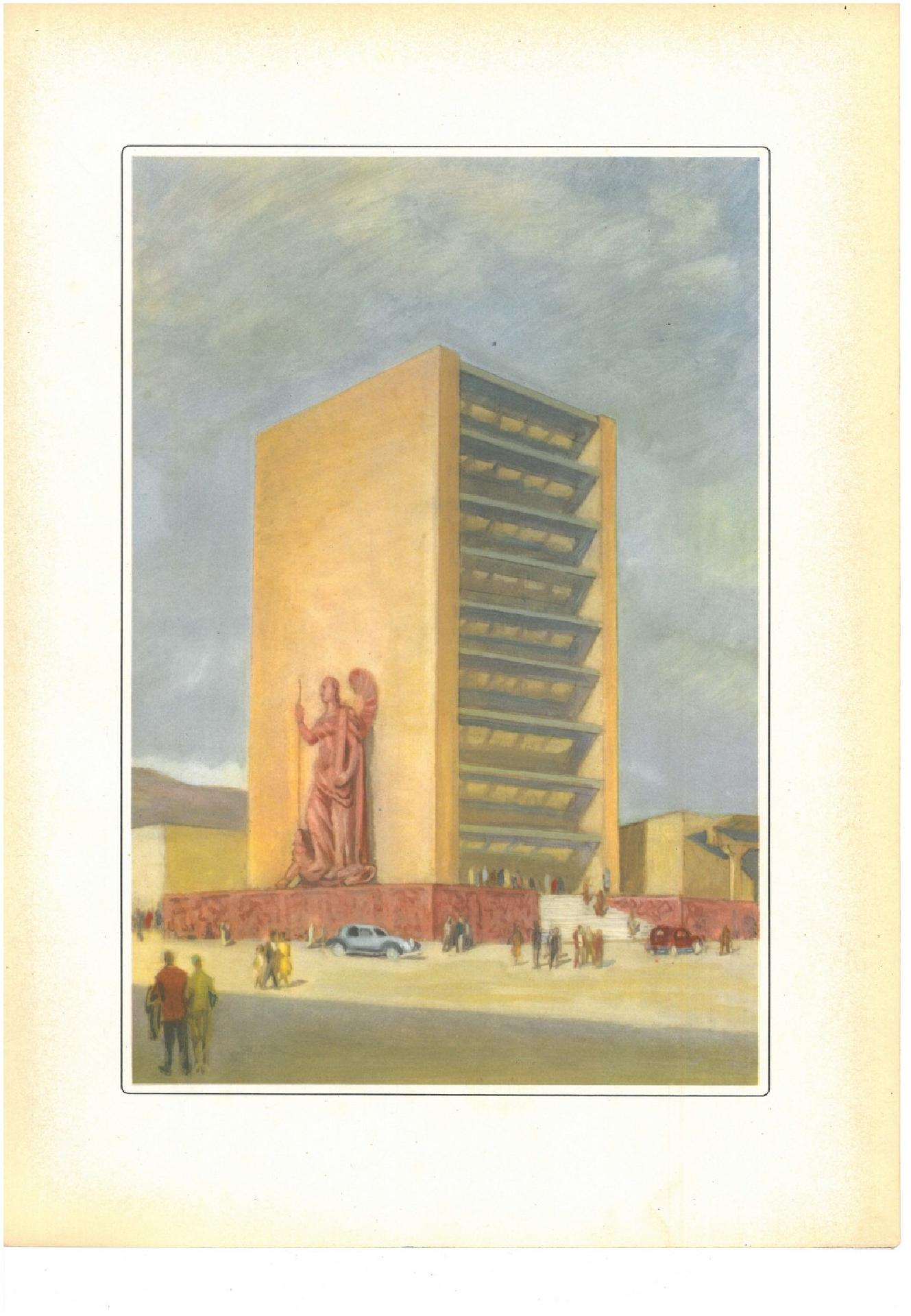 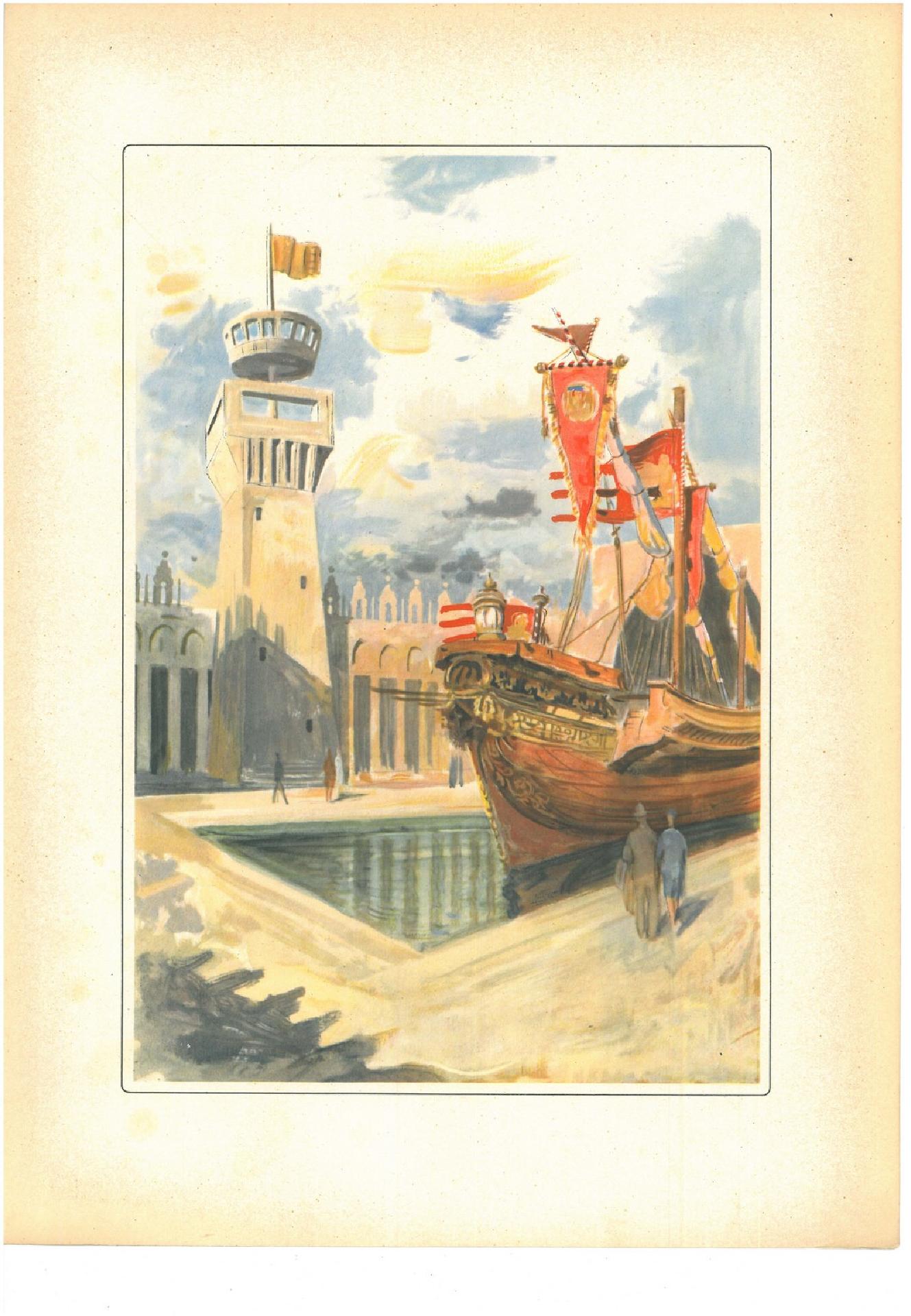 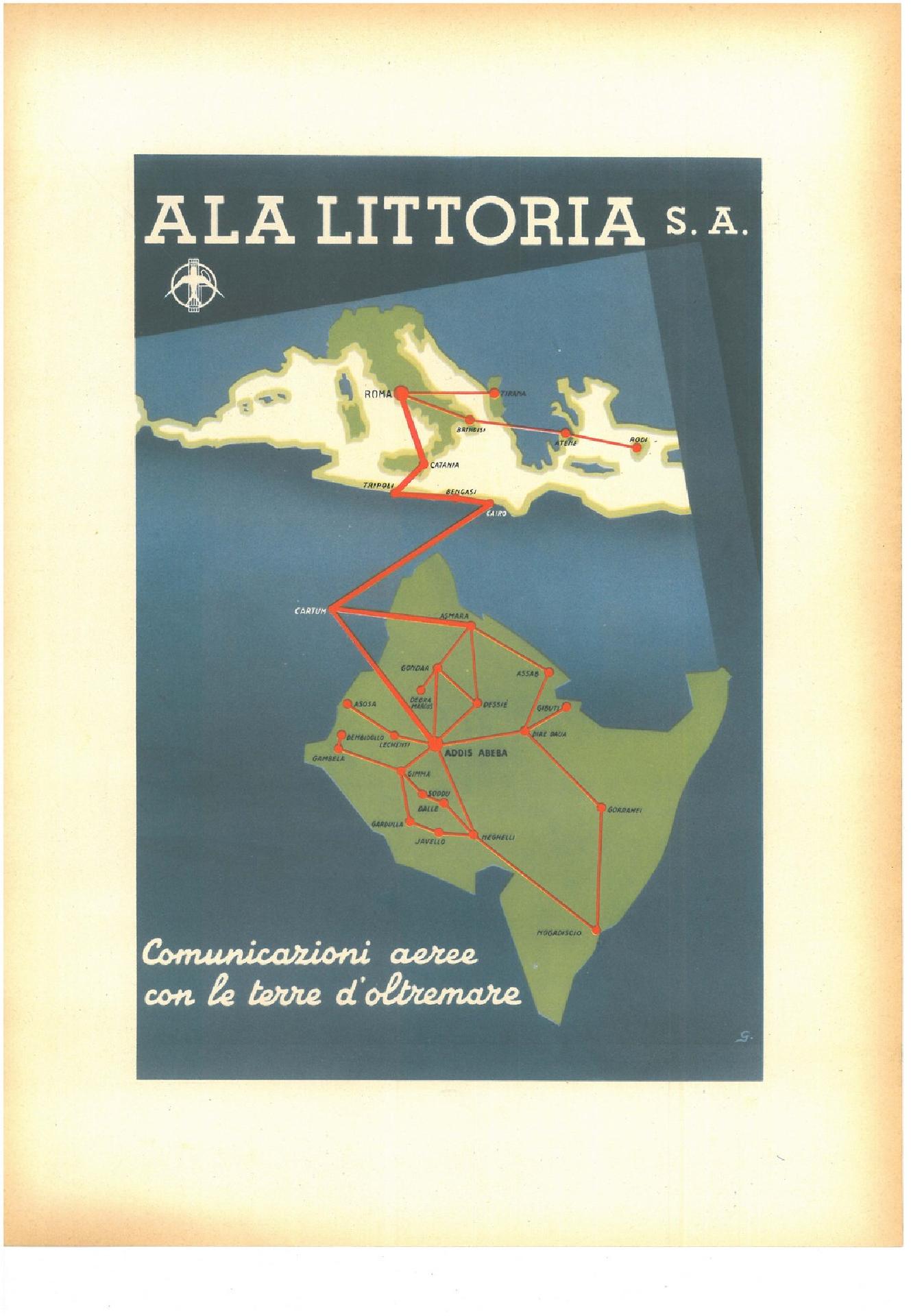 The exhibition was articulated in accordance with three major themes: the geographical section was to "include complete and suggestive visions of our possessions"; while the section dedicated to production documented the activities carried out in the territories and illustrated the economic possibilities linked to autarchic, Italian, and colonial production "for the economic reinforcement of imperial Italy." Lastly, the historical section-showcasing Roman colonial work in the Mediterranean, the expansion of the maritime republics, the "civilizing" activity of pioneers, explorers, missionaries, merchants-was intended to affirm the historical, and ideal, continuity between the Roman Empire and the new Fascist Empire. The complex covered an area of 1.2 million square meters in the Campi Flegrei area. Its realization also provided an opportunity to start a program of renewal and revitalization of the city, as desired by Il Duce himself.

The new exhibition district, located in the Campi Flegrei area, was connected to the city by an "imposing road network, with direct and panoramic arteries," by a direct underground railway, by the electric railway Cumana, and by the new cableway that connected the area, in just six minutes, with the Parco delle Rimembranze at Capo Posillipo. The urban project, developed by architect Marcello Canino, provided for construction of no fewer than 54 buildings, some of which were destined to host exhibitions, while others were intended for recreational activities.

Rationalist buildings coexisted along with examples of exotically inspired architecture. The most representative building, certainly, was the PNF Tower, built by Venturino Ventura, with its height of 40 meters and high base decorated with commemorative bas-reliefs by Pasquale Monaco and Vincenzo Meconio. Around it were built the Palazzo dell'Arte, a 15,000-seat arena-theater, a children's theater, a restaurant with swimming pool, the Viale delle Fontane, and the scenic exedra at the end of that.

But there was also more folkloric architecture, conducive to immersing the visitor into an exotic atmosphere: a medieval welfare hotel belonging to the Order of Malta (project by architect G. B. Ceas); Venetian and Genoese districts; the complex of the pavilions of Italian East Africa, by architects Mario Zanetti, Luigi Racheli, and Paolo Zella Melillo, with the picturesque Fasilides Bath, Coptic church, and Abyssinian villages, and an entire suburb of Tripoli, with palm trees, cafes, emporiums, and a minaret. The most characteristic building was the Golden Cube, a perfect volume completely covered with a mosaic inspired by the architecture of Axum. Inside, the frescoes in the Salone dell'Impero, painted by Giovanni Brancaccio, celebrate the conquests of the regime.

The architectural works were immersed in a Mediterranean garden: 250,000 plants distributed among green areas and botanical greenhouses provided a pleasant documentation of the vegetation in the colonies. There was also a zoo, whose project was curated by architect and urban planner Luigi Piccinato, rich with 4,000 specimens coming from the lands of the Empire, and a tropical aquarium. An archaeological area that was discovered during excavations, and an amusement park, were also incorporated into the exhibition area.
The First Triannual Exhibition of Italian Overseas Territories had been planned to continue until 15 October 1940, but closed after just one month of activity, following Italy's entry into the war. The complex was heavily damaged by bombing: rebuilt in the post-war period, today it is one of the greatest examples of Italian rationalist architecture.

Since 2014 it has hosted a modern fair and convention center, a home to cultural and leisure activities: the Parco Mostra d'Oltremare (Overseas Territories Exhibition Park).